It is the act everyone is buzzing about. It is the rock phenomenon – Jagged Little Pill! This July, New York City will host the new musical Jagged Little Pill for a night of magic proportions. The show is so dense with plot that could have sustained solely on the classic 12 songs from Morissette’s seminal, Diamond-certified 1995 album that gives the musical its title. You’ll hear all of them framed within inspired contexts: “Ironic” is sung in a high school writing workshop, “Forgiven” is an act-one curtain closer set in a church that dramatizes an unsettling turning point in Mary Jane’s spiraling pill addiction. The show also features nine other favorites from Morissette’s later repertoire, including “Hands Clean,” “Thank U,” and “Uninvited.” Plus, two new songs have been written for the occasion, “Smiling” and “Predator.”! Prepare to immerse yourself in the glorious storyline Jagged Little Pill and be taken to the world this performance has prepared for you. Save the date, Thursday 29th July 2021, and get your tickets now!

In recent surveys and polls the iconic Broadhurst Theatre stands out as one of the top three arenas in New York City. Many fans have even called it the “must-visit place to see Broadway musicals in New York”! The acclaim starts from the 5-star shows that are regularly playing at the Broadhurst Theatre giving audiences a taste of the Best of Broadway, and on Thursday 29th July 2021, this will be no different because the highly regarded new musical, Jagged Little Pill is returning to town! This spectacular musical premiered on May 5th, 2018 at the world famousAmerican Repertory Theater in Cambridge, Massachusetts. Since then, the show has been blowing away audiences all over the country and winning awards left, right and centre. Being included in more than 5 different Honouree categories at the Outer Critics Circle Award’s in 2020, this show is certain to rack up more awards along the way. If you can only see one musical this July, then make sure you go to the Broadhurst Theatre in New York City, New York! 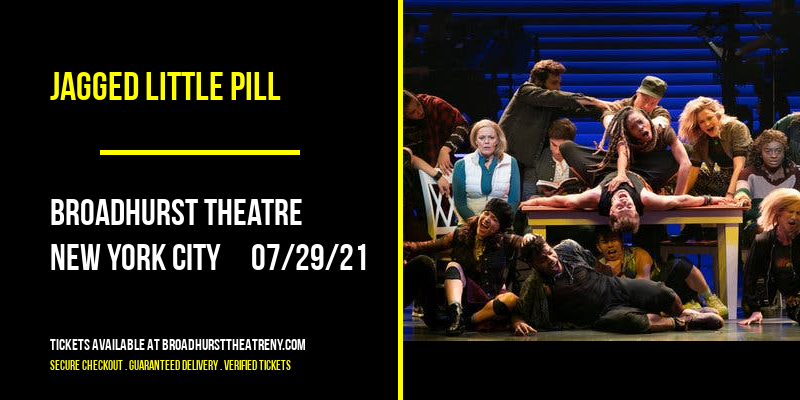