If you thought that the best live shows of 2021 have already taken place, then you must not have heard that the new musical Jagged Little Pill is performing a live concert at the iconic Broadhurst Theatre in New York City, New York on Wednesday 21st July 2021. This spectacular show premiered on May 5th, 2018 at the iconicAmerican Repertory Theater in Cambridge, Massachusetts. Since then, the musical has been blowing away audiences all over the world and winning awards all over the place. Being included in more than 5 different Honouree categories at the Outer Critics Circle Award’s in 2020, this show is certain to rack up more awards along the way. Why not treat yourself to incredible Wednesday evening entertainment this July by saving the date so you don’t miss out on seeing Jagged Little Pill, live! To get your tickets today, click the Buy Tickets button now!

Music is one of the best remedies around, so it's no wonder that Musicals are one of the most popular events in history! Broadway has given to the world a long list of theater performances that have and still are awe-inspiring for fans. Broadway has been growing even bigger and better with a new addition of creating productions that pay tribute to musicians such as Beautiful: The Carole King Musical. And NOW in 2021, alternative fans can grab the chance to enjoy a Broadway show made just for them! That's right Jagged Little Pill brings back to life the Alanis Morissette album to the venue in full! For many fans, getting it just right is important to them, making sure that their favorite band or singer is represented correctly. Jagged Little Pill is widely known for its perfect display of Alanis Morissette and her songs. Come and catch all of your most loved songs LIVE as the talented cast of Jagged Little Pill perform them in this MUST-SEE, EYE CATCHING, MESMERISING showcase! 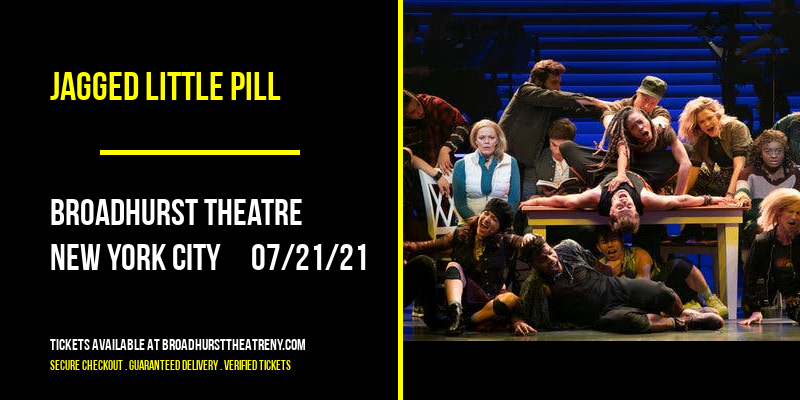