Just imagine it. You could be sitting alongside a sell-out crowd eagerly anticipating the second when the curtains fall and the audience brings their hands together and welcome the new Jagged Little Pill to the stunning Broadhurst Theatre stage! Jagged Little Pill is so dense with plot that could have sustained solely on the original 12 songs from Morissette’s seminal, Diamond-certified 1995 album that gives the show its title. You’ll hear all of them framed within inspired contexts: “Ironic” is sung in a high school writing workshop, “Forgiven” is an act-one curtain closer set in a church that dramatizes an unsettling turning point in Mary Jane’s spiraling pill addiction. The show also features nine other favorites from Morissette’s later repertoire, including “Hands Clean,” “Thank U,” and “Uninvited.” Plus, two new songs have been written for the occasion, “Smiling” and “Predator.”! So if you want to join the fun, then click that Buy Tickets button below. But get your tickets quick, because they won’t last long and once they’re gone, they’re gone for good.

Music is one of the best remedies around, so it's no wonder that Musicals are one of the most popular events in history! Broadway has given to the world a long list of theater performances that have and still are impressive for fans. Broadway has been growing even bigger and better with a new addition of creating productions that pay tribute to musicians such as Beautiful: The Carole King Musical. And NOW in 2021, alternative fans can grab the chance to enjoy a Broadway show made just for them! That's right Jagged Little Pill brings back to life the Alanis Morissette record to the venue in full! For many fans, getting it just right is important to them, making sure that their favorite band or singer is represented correctly. Jagged Little Pill is widely known for its perfect display of Alanis Morissette and her songs. Come and catch all of your most loved songs LIVE as the talented cast of Jagged Little Pill perform them in this MUST-SEE, EYE CATCHING, MESMERISING showcase! 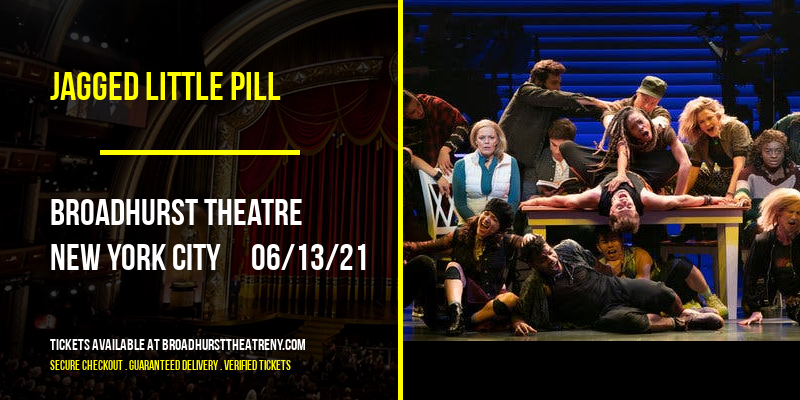