The world is talking about Jagged Little Pill, but not how you might know of it! Alanis Morissette's third studio album brought out in the mid 1990s paved way for a whole new wave of alternative music. Now fast forwarding to twenty five years since it first took to the charts, the record has just been transformed into an unique Broadway performance for her beloved fan base! If you love her biggest songs from "Ironic" to "Hand in my Pocket" then here's your opportunity to witness all of her best material live on stage. Secure your tickets for Jagged Little Pill at Broadhurst Theatre on Thursday 12th November 2020 – you won't regret it!

Jagged Little Pill is finally arriving soon to the iconic Broadhurst Theatre in New York City, New York on Thursday 12th November 2020! This spectacular performance premiered on May 5th, 2018 at the iconicAmerican Repertory Theater in Cambridge, Massachusetts. Since then, the musical has been blowing away audiences all over the country and winning awards left, right and centre. Being included in more than 5 different Honouree categories at the Outer Critics Circle Award’s in 2020, this show is certain to rack up more awards along the way. So make sure when you experience smashing Broadway musicals like Jagged Little Pill, at the Broadhurst Theatre in New York City, New York! 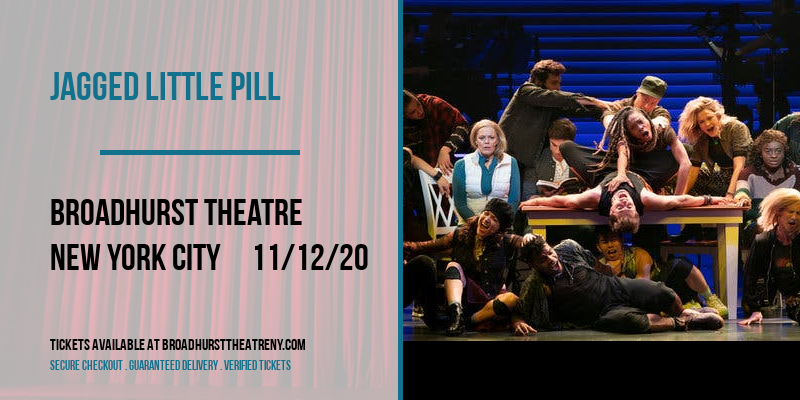