Just imagine it. You could be sitting alongside a sell-out crowd eagerly awaiting the minute when the curtains fall and the audience brings their hands together and welcome the new Jagged Little Pill to the stunning Broadhurst Theatre stage! Jagged Little Pill is so dense with plot that could have sustained solely on the original 12 songs from Morissette’s seminal, Diamond-certified 1995 album that gives the performance its title. You’ll hear all of them framed within inspired contexts: “Ironic” is sung in a high school writing workshop, “Forgiven” is an act-one curtain closer set in a church that dramatizes an unsettling turning point in Mary Jane’s spiraling pill addiction. The show also features nine other favorites from Morissette’s later repertoire, including “Hands Clean,” “Thank U,” and “Uninvited.” Plus, two new songs have been written for the occasion, “Smiling” and “Predator.”! So if you don’t want to miss out, then click that Buy Tickets button now. But get your tickets quick, because they won’t last long and once they’re gone, they’re gone for good.

Have you ever been to the theater? If not, then maybe you don’t know why you should. Theater gives people with something they are maybe missing something in their life, or wishing they had, or even want to be transported to a magical world; and seeing it on stage, directly in front of you, is a way to fill that void! Maybe it’s just pleasure or maybe, from a more casual point of view, it’s where people like to take their significant others on dates. If that’s not already persuaded you, maybe telling you that the new rock musical Jagged Little Pill is coming might! Inspired by Alanis Morissette’s Grammy Award-winning spectacle, JAGGED LITTLE PILL brings to the stage the “humanly recognizable and magnificently staged story” of the Healys, a suburban family whose serene Connecticut lives collide head-on with some of the most talked about issues of today. So, for your next theater show, why not come to the Broadhurst Theatre and see this amazing show! 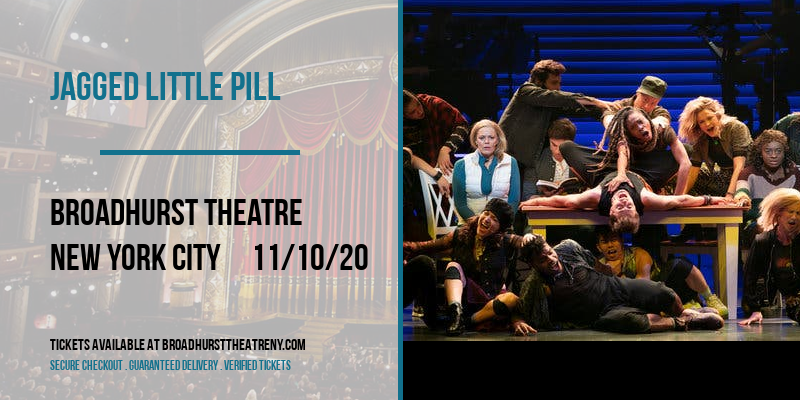