Known as one of the most influential and timeless albums to come out of the 1990s, especially for female solo artists, Jagged Little Pill took to the radio stations across the countries and rose Alanis Morissette into stardom. With so many amazing songs from the album such as; "You Oughta Know" "Hand in my Pocket" "Ironic" "Forgiven" and more, Alanis became a superstar but of the best kind in her alternative much loved style. With her unique vocals she proved her capabilities and has since become a favorite artist for so many. A hit Broadway musical has now been created to show off her career in a unique, captivating way! Join in and catch Jagged Little Pill as it takes to the Broadhurst Theatre stage on Tuesday 13th October 2020!

Jagged Little Pill is finally arriving soon to the iconic Broadhurst Theatre in New York City, New York on Tuesday 13th October 2020! This spectacular performance premiered on May 5th, 2018 at the world famousAmerican Repertory Theater in Cambridge, Massachusetts. Since then, the musical has been blowing away audiences all over the world and winning awards all over the place. Being included in more than 5 different Honouree categories at the Outer Critics Circle Award’s in 2020, this show is sure to rack up more awards along the way. So make sure when you watch impressive Broadway musicals like Jagged Little Pill, at the Broadhurst Theatre in New York City, New York! 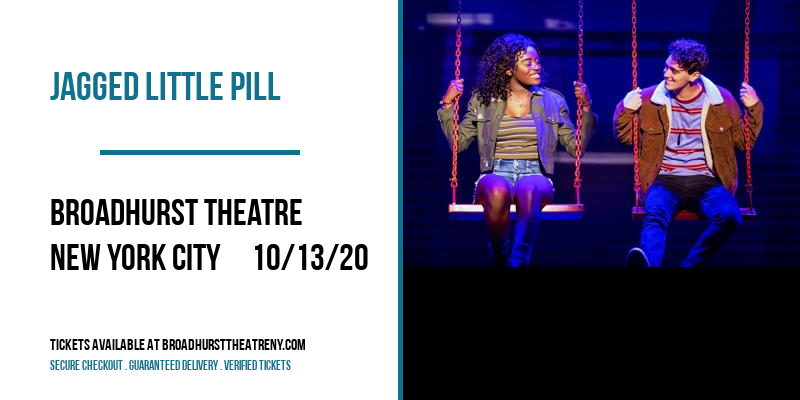